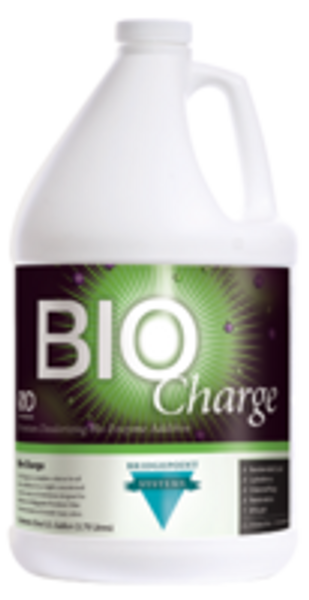 WHAT IS IT? Bio-Charge is a highly concentrated bacteria/enzyme formulation designed for addition to Bridgepoint Premium Odor Counteractants to eliminate odors from urine, mold, mildew, organic rot, vomit, smoke, skunk and protein fire residue. HOW DOES IT WORK? Selected strains of bacteria produce broad-range enzyme activity that breaks down the substances which cause odor. The good bacteria "out race" the bad, and consume food sources for molds and mildews as well. Once all the organic material has been consumed, the bacteria spores become dormant and those on the surface will be vaccumed or removed during normal maintenance. The major success of Bio-Charge is achieved when it is combined with the chemical odor neutrilizing effect of our Premium Odor Counteractants. These products address the issues of non-organic odors, which can be part of many difficult odor problems. WHY THE BIO-CHARGE SYSTEM WORKS BETTER THAN OTHER DEODORIZERS Premium Odor Counteractants designed for specific odors combined with a high level of safe bio-enzyme product will simply work better than any single bacteria enzyme treatment. ADDED BENEFITS When you use Bio-Charge, you'll notice an immediate effect. It immediately starts to neutralize odors. Then it goes to work with its bio-enzymes to control and remove all odors during the entire drying process. It even digests any residual stains, sugars, and oils left after regular cleaning. This makes it a highly effective formula for flood work.